For a while, Wesley de Oliveira Quirino felt lost. Not knowing which way to go, he embarked on the world of drugs and trafficking. It was at Instituto Ramacrisna that his life was transformed, after finding his purpose: music. On the cello strings, his talent blossomed. For the love of art and music, Wesley gained new perspectives. He has been a cellist in the orchestra for eight years and this year he became both cello chief and instructor, now he passes on his knowledge to new students. “The music was like a snap, it transformed me from the inside out. It was a revolution in my artistic and financial life”, says he, who plans to become a recognized musician.

The Ramacrisna Youth Orchestra completes, this August, 17 years with countless stories like Wesley’s. Currently formed by 40 musicians aged between 10 and 24, including children and young people in socially vulnerable situations from the Vianópolis community, in Betim, the Orchestra takes beauty, art and poetry, in the form of music, wherever it performs. Born in 2005, after donating seven violins, it has become one of Ramacrisna’s most important projects. Its rich repertoire brings together classic songs and great hits of Brazilian popular music (MPB), which enchant and transform lives.

The group has already performed in the main cultural spaces of the metropolitan region of Belo Horizonte and has in its curriculum partnerships with artists such as Banda Tianastácia, Trio Amaranto and the Italian tenors Claudio Mattioli and Massimiliano Barbolini, Saulo Laranjeira, among others..

Stories of transformation – Among musicians, there are other stories of overcoming, transformation, healing and beginnings. Sarah Maia is another example. In 2012, she joined the Orchestra seeking help for depression. He began to study the horn and fell in love with the double bass, today his main instrument. In music, he found much more than a cure for his pain, but a profession and a new meaning for life. Today, Sarah helps other young people like her as an orchestra instructor. The young woman continues to study hard and wants to be a teacher.

“For me, Ramacrisna means exousia [power, in Hebrew]. They exert a transforming power over us. They allow for a metanoia in our lives, a radical change of life, of thought […] I am very grateful. I wouldn’t be where I am today if they hadn’t invested and insisted on me,” says Sarah.

Enrolled in the Orchestra by his grandmother against his will, when he was 11 years old, Davi Sassaki was upset until he heard the sound of the oboe. It was love at first sight. The dedication and learning of the instrument contributed to Davi being approved in 1st place in the entrance exam for the musician course at the Federal University of Minas Gerais (UFMG). Davi remains dedicated and dreams of being the first oboist of the Minas Gerais Philharmonic Orchestra.

Revealed skills – For Solange Bottaro, vice president of Ramacrisna, the project has been a watershed in the lives of students. “The Orchestra brings together children and teenagers who arrive insecure, but soon discover incredible abilities. And many of them see in music the opportunity to have a profession and to fulfill their dream of going to college and having a source of income”, she says.

With a degree in Violin from UFMG and a postgraduate degree in Neuroscience and Psychoanalysis Applied to Education, conductor Eliseu Martins de Barros praises the project, led by him since 2014 . “Many students arrive at the project with their self-esteem destroyed, not feeling capable. In a short time, they transform. They are very talented and smart and learn their lessons quickly.”.

Orchestra House – Last year, the Ramacrisna Youth Orchestra won a house with 500 square meters of built area, for music lessons and general rehearsals. Until then, the rehearsals were carried out in the gardens of Ramacrisna and in the open area in front of the rooms where the instruments were kept. “Now, with Orchestra House, it was possible to expand the project, offering a beautiful and more comfortable space for our students”, highlights Solange.

Support – Companies interested in helping to expand the project can contribute with direct donations or through the allocation of part of the Income Tax to the Fund for the Rights of Children and Adolescents (FDCA). Currently, three companies are partners with the Ramacrisna Youth Orchestra: Nova Transportadora do Sudeste (NTS), which allocates funds through the FDCA, Hotmart, which contributes to the internal donation program, called Hotmart One, and Essencis, which also makes transfers via FDCA. 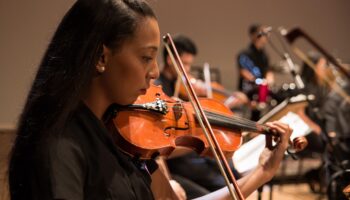 Music week: become a sponsor of the Ramacrisna Youth Orchestra

For 17 years, the Ramacrisna Youth Orchestra has been transforming the lives of children and […] 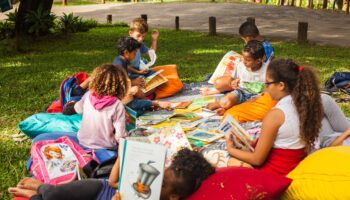 Books are a source of culture, knowledge and pleasure and can bring many benefits. Check […] 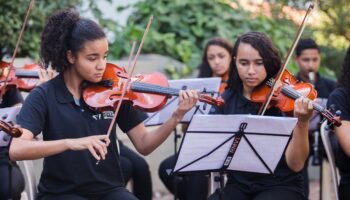 Discover the history of the Ramacrisna Youth Orchestra

Since June 2005, the Ramacrisna Youth Orchestra has been promoting musical training for preteens and […]