Ramacrisna opens the Orchestra House on 11/30

Event will have Christmas Sonata with the participation of Trio Amaranto

The Ramacrisna Youth Orchestra will gain a new space, with 500 square meters of built-up area, for music classes and general rehearsals. The Orchestra House is located at the headquarters of the Ramacrisna Institute (Street Mestre Ramacrisna, 379), in Betim City, and will be inaugurated on 11/30, at 2:00 pm, with a Christmas Sonata with the special participation of Trio Amaranto.

The new space has four rooms separated by instrument categories (strings, (wind) wood, (wind) brass and percussion) and music theory, in addition to a balcony and a garden surrounded by a green area. There is also a hall for small performances and group rehearsals, with large windows and excellent ventilation.

Created in 2005, the Ramacrisna Youth Orchestra currently has 40 musicians. The project serves socially vulnerable children and youth in the community of Vianopolis, in Betim City, aged between 10 and 24 years.

Until then, rehearsals were carried out in the Institute’s gardens and in the open area in front of the rooms where the instruments were kept. “Now, with Orchestra House, it will be possible to expand the project, offering a beautiful and more comfortable space for our students”, highlighted the vice president of Ramacrisna, Solange Bottaro.

Conductor Eliseu Martins de Barros has been in charge of the project since 2014. He holds a bachelor’s degree in Violin from UFMG and a postgraduate degree in Neuroscience and Psychoanalysis Applied to Education, he works with great names in Brazilian music, such as Caetano Veloso, Skank and Paula Fernandes. For him, the new rehearsal space is wonderful, in many ways: “Firstly because it’s a big house that reminds us of the family, a friendly environment. It’s not like the buildings, which have elevators and so on. The house is welcoming. And another benefit is the location: the large house has a green area all around. Therefore, we have a lot of nature around, which brings tranquility, lowers tension, anxiety and stress”, highlights the conductor.

Transformation of lives – According to Solange, the project has been a watershed in the lives of students. “The Orchestra brings together children and teenagers who arrive unsure, but soon discover incredible abilities. And many of them see in music the opportunity to have a profession and to fulfill their dream of going to college and having a source of income”, she says.

Conductor Eliseu agrees that many students arrive at the project with their self-esteem destroyed, not feeling capable. “Our job is to show that it’s possible for them to succeed in life as musicians. But many of them cannot overcome this emotional barrier and this is the biggest challenge we face. Because in learning there is not much problem: they are very talented and intelligent and they learn lessons quickly”, she emphasizes.

Support – The orchestra’s history began with the donation of seven violins and soon became one of Ramacrisna’s main projects. The group has already performed in the main cultural spaces of the metropolitan region and has in its curriculum partnerships with artists such as Tianastácia Band, Trio Amaranto and Italian tenors Claudio Mattioli and Massimiliano Barbolini, among others.

Companies interested in helping to expand the project can contribute with direct donations or by allocating part of their income tax to the Fund for the Rights of Children and Adolescents (FDCA).

Currently, three companies are partners of the Ramacrisna Youth Orchestra: A Nova Transportadora do Sudeste (NTS), which allocates resources through the FDCA, Hotmart, which contributes to the internal donation program, called Hotmart UmporCento, and Essencis, which also makes transfers via FDCA. 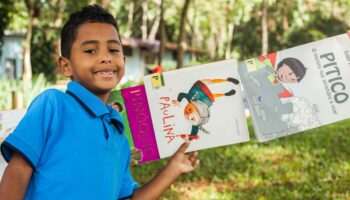 Children’s book: how to choose the most suitable for the child’s age?

To celebrate National Children’s Book Day, we have prepared a guide on how to choose the most suitable copies, according to the child’s age. 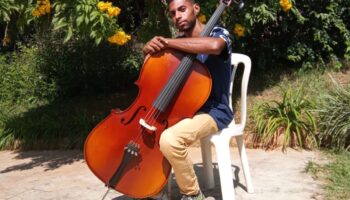 Inside Ramacrisna: know the story of Wesley Oliveira Quirino

Young musician transformed his life through the Ramacrisna Youth Orchestra. Now, he celebrates being hired as an employee and can help other children and teenagers 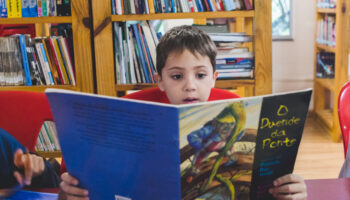 Book donation: your help can contribute to the formation of new readers

The 14th of February is International Book Donation Day. But your contribution can take place throughout the year. learn how to do it.